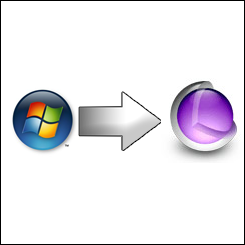 The tide is turning or so it seems. Well, maybe it’s not quite so monumentous as a tide shift, but there is certainly a buzz in the air that I think is indicative of at least a gradual shift. I can’t speak for all Windows developers of course, but I’ve talked to enough of my friends to know that the Macintosh is no longer in their eyes some obscure computer made by some obscure computer company that makes computers for artists. It’s got some amazing tech that would appeal to any geek especially programmers who have the initiative to take advantage of it.

I made the switch to the Mac along with a job change back in June of 2007 and I have to say that I am glad I did. It’s not to say that there aren’t good tools for programmers on Windows, but there is most definitely a different approach to everything from the kinds of applications that you build to the way you build them on the Macintosh. These differences in some areas are subtle, but in others they are monumentous.

Core Animation, for instance, a technology that enables programmers to use animation to provide users with visual feedback of many different sorts (e.g. change window frame dimensions and watch the window change in steps rather than having the frame update instantly), is really groundbreaking. It’s not something that you see in Windows programming. There are many other technologies that have a similar appeal. Some frameworks that I’ve used such as WebKit–a framework for building web applications, or QTKit–a framework for building multimedia applications based around QuickTime, are exciting and interesting to work with.

I have made predictions in the past that haven’t come true, so when I make a prediction, you ought to take it lightly. However, on this one I feel pretty confident. Apple just gets doing technology elegantly and they’ve made their tools and libraries available to everyone so that anyone who takes the initiative can build elegant software themselves. This fact, I think, will soon have a snowball effect that will start brining programmers from the Windows world in droves. Considering the disappointment that Vista is and the fact that Microsoft doesn’t even seem to like it, Windows programmers are going to start looking for ways to deepen and broaden their toolsets and even consider new platforms such as the Mac.

So what are the hurdles to entry? I think the following list pretty well summarizes it:

If you are planning to switch or have just recently switched to the Mac, you should know that you are far more likely to find work building applications for consumers. Most of the work I’ve done over the years on Windows has been business software. This is one of the main differences. I think this will also shift over time, however, for right now, expect to build applications your mother might use rather than software your company might use. And if you have any questions as to what other benefits there are, talk to any successful independent Macintosh software vendor out there. There are lots of them and they do very well.

4 thoughts on “Windows Programmers Shifting to the Mac?”